In 1878 English cattleman Moreton Frewen named the area on Powder River where he located his 76 Ranch headquarters “Sussex” after his home county in England. But decades before Frewen marked the beginning of the Cattle Boom in Wyoming, the Sussex area East of Kaycee was the stage where early explorers, travelers, trappers, the US military, and even missionaries played their part in Western expansion.

The fascinating and little known history of these people and events will shared by knowledgeable local historians as you travel by bus eastward from Kaycee through the Powder River Country. Tour will be held on Saturday, September 12, 2020 and the deadline to register is September 4th.

Some of the famous sites and events explored on this guided historical tour include:

Tour Cost is $80 per person, which includes lunch at Fort Reno, and begins in Kaycee at 9:00 AM. Registration is required in advance and space is limited on the bus, so sign up early.

To find out more about the tour or register, you may contact the museum at 307-738-2381 or register here: http://hoofprintsofthepast.org/product/forts-fights-and-frontier-sites-tour/

Our 2020 Hole in the Wall Tour on June 13th traces the steps of the Outlaw Era from the sympathy towards rustlers and outlaws that resulted from the Johnson County War through the famous Hole in the Wall Fight.

The tour begins in Kaycee at the KC Fight site, then the site where the Hole in the Wall gang hid from the posse after the Wilcox Train Robbery. It then follows the Old Barnum Road to the location where Kid Curry of the Hole in the Wall gang shot Sheriff Deane before traveling into the famous Hole in the Wall Valley. Here the numerous stories of fact regarding local outlaws are related by knowledgeable authors and local historians. Site stops include overlook of the Hall Cabin where Champion was first ambushed, the entire valley, the homestead site of Alex Ghent, horse trader and friend of the outlaws, the real Hole in the Wall site, where a picnic lunch is enjoyed, before finally traveling to the Hole in the Wall Gap on the Red Wall.

The tour is an important fundraiser for the museum, and costs $95 per person. This includes continental breakfast, a nice lunch, and a day in the famous Hole in the Wall country. Even if you are not a history buff, you will experience beautiful scenery and a unique day that few have the opportunity to share. If you would like to know more about the tour, please contact the museum at 307-738-2381 or email info@hoofprintsofthepast.org

The Johnson County War tour on August 22, 2020 allows attendees to travel by bus the approximate route of the “Invaders” in their fateful attack on the “Rustlers” in April 1892, learning about the war and stopping at various sites of historical significance along the way.

Stops include the KC Cabin Fight site, where Nate Champion made a heroic stand against overwhelming odds, Plunkett’s Horse Ranch where the Invaders changed horses, the Smith homestead site where a near ambush of the Invaders almost occurred, the historic 28 Ranch where Invaders rested their horses, and the TA Ranch where the final battle occurred. The tour will also stop at the assassination sites of John. A. Tisdale and Ranger Jones, whose murders occurred in the months leading up to the war, foreshadowing the events of 1892.

The historical guides narrating the journey are John W. Davis and Brock Hanson. Davis is a lawyer and author of “Wyoming Range War” which relates the Johnson County War from a legal vantage using a large number of public documents from the period. Brock Hanson is a 4th generation local historian whose family lived through the war and documented the historic events with interviews of the various people involved in the war.

The tour will be held on Saturday, August 22nd, beginning in Kaycee at 9:00 AM (with an AM check-in time of 8:30 AM) and ends at approximately 3:00 PM. Lunch is included the ticket price of $90, which must be purchased in advance due to limited space on the bus.

The Hoofprints of the Past Museum is a 501(3)c non-profit organization dedicated to preserving and sharing Kaycee and Johnson County history.

Space is limited, so please register soon. You may call the museum at 307-738-2381 to register or with questions, or register here Johnson County War Tour Registration 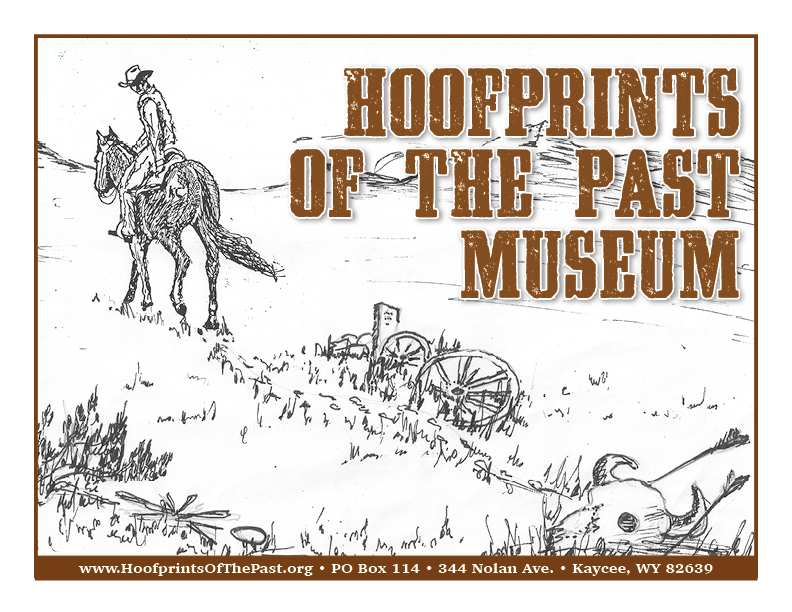